We at Indian Summer Films, an independent production company, are presently developing and scripting a one-hour film documentary about the history of the Navajo Long Walk.  From 1863 to 1868, the United States forced marches the Navajo people, on foot from their homeland in Arizona to be incarcerated at Bosque Redondo, Ft. Sumner, New Mexico.  Over 200 Navajo men, women, and children died along the trail and more than 8,000 Navajo prisoners-of-war died over four horrendous years in prison.

Although the story of the Navajo Long Walk is somewhat well-known in Arizona and New Mexico, very little is known about this horrific history outside of the American Southwest.  The documentary intends to use the large amount of archived materials, documents, letters, and photographs that have been stored in museums, libraries and archives.  Most importantly, we will rely on the memories and stories of the descendants of the people who lived during that time and who may have witnessed the Navajo journey to Bosque Redondo.

The stories and participation of the descendants are crucial to the film’s content, purpose, and success.

Sacred Wind Communications is a sponsor of the Long Walk documentary

The Long Walk was a dark time in the Navajo people’s history. They were forcibly taken from their homeland and made to walk miles through harsh terrain, with little food, and under attack from other native tribes. Many Navajo families have personal stories that have come down through the generations of what their family endured and how their family members survived. Below is the first of these stories.

1.  “I Am the Survivor of My Grandmother’s Story”

In the Spring of 1868, the Diné were prisoners of War. In a time of great leaders, a strong and eloquent Navajo Chief stood before the United States government, Barboncito, one of the twelve leaders who signed the Treaty of the Long 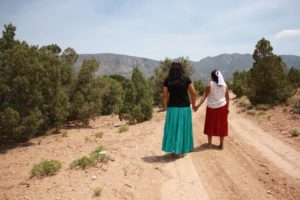 Walk. Before the treaty was signed the Navajo were prisoners of war, after the treaty, the Navajo were free and began the long walk back to the sacred homeland. Among the many Navajos on the ‘long walk’ home, was my great, great grandparents and their infant son. Already weakened from the years of incarceration at Fort Sumner, the miles of walking and with little nourishment, the people became dehydrated, weak and unable to care for one another. Many of the people were left behind to die.

One particularly hot day, my grandparents struggled, trying to care for their son. After walking all day, exhausted and hungry, they could no longer carry their child. The agonizing decision was made to leave the baby behind. The baby was wrapped in cloth and left underneath a sage brush.

When night fell they set up camp. Sometime during the night when the stars were bright and the coyotes were howling, they could hear in the distance their child crying. My grandmother started to cry, convinced my grandfather to sneak out of the camp, bypass the guards, and head back to the where they left their baby.

Before sunrise he returned with the baby and my grandmother rejoiced that their child had been brought back safely to her and that her son had been watched over by the holy people during the night.

If it wasn’t for this child and his survival during the ‘long walk’, I would not be in existence.