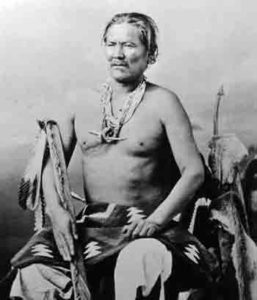 Chief Manuelito, known as “Little Manuel” in the Spanish language, was born in southeastern Utah in 1818. He was born to the Bit’ahnii clan (Folded Arms People Clan). He had other names he was known by as well: Hastiin Ch’ilhaajinii’(Black Weeds), Ashkii Diyinii (Holy Boy), Nabaah Jilt’aa (Warrior Grabbed Enemy) and “bullet hole” to non-native people. Manuelito was a huge man, measuring over six feet tall and weighing about 200 pounds. His large frame matched his superb leadership and strategic skills.
Manuelito moved from Utah to his wife’s camp in New Mexico where he lived near his father-in-law, the well-respected Navajo leader Narbona. He is known for signing various treaties from the Lava Springs Treaty in 1846, the Meriwether Treaty in 1855 and the famous Treaty of 1868.

The Long Walk began in 1864 and many Navajos were forced to walk from their homeland to a desolate land in eastern New Mexico. This place was known as Bosque Redondo but to the Navajo it was known as Hweeldi’ (Place of Great Suffering). Many leaders, such as Barboncito and Delgadito, surrendered in 1864 but Manuelito and his band held out until 1866 when starvation drove them to surrender to the US army. Bosque Redondo was a horrific place for the Navajo. Brackish water, failed crops, disease and raids from the Comanche made the Bosque Redondo a hellish existence for the Dine’. These poor living conditions motivated Manuelito to negotiate his people’s release from Bosque. Finally in 1868, a treaty was signed by the U.S. Government and many headmen of the Navajo tribe, including Manuelito. This treaty authorized the Navajo to return to their homelands in exchange for a permanent cessation of war with the United States.

After 1868 Manuelito still served his people. In 1872 he was appointed as the head of the first Navajo police force. This force was to stop and punish Navajos who raided other tribes or settlements. In 1876 Manuelito traveled to Washington D.C. to meet with President Grant to discuss encroachment issues on Navajo lands. Manuelito, also, advocated for education for Navajo children, so much so that in 1882 he sent his two sons to Carlisle Indian School in Pennsylvania. In 1883 one of his sons died at the school and the other boy died upon returning home from school. Both boys had contracted disease that was widespread at the school. After these tragic losses, Manuelito changed his views about education. Manuelito lived another 10 years after his sons’ death, he himself dying from measles and pneumonia.

Chief Manuelito lived an extraordinary life in a period of time when the West was truly the Wild West. He was an inspirational leader for the Dine’ people; he fought for his land, his people and the Navajo way of life. Through these brave and noble actions, he continues to inspire Dine’ people to this day.