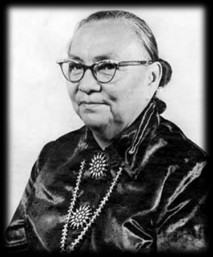 Annie Dodge Wauneka was born in 1910. She was the daughter of the first Navajo  Tribal Chairman Chee Dodge. As a child, Annie was influenced by her father’s  political status in the tribe, becoming the first woman to serve on the Navajo  Tribal Council.

Annie Dodge went to the BIA boarding school in Fort Defiance where disease  overcame the school with tuberculosis. She was tutored by the school nurse to  assist in taking care of the sick children. Fortunately, she never caught the  disease, but this epidemic influenced her later in life. As an older student, she  attended Albuquerque Indian School with her two siblings. Annie went to the  Albuquerque Indian School until the eleventh grade, and although never graduating, her education did not stop there. She went home to Sonsela, NM and Tanner Springs, AZ to help take care of her father’s two large ranches where she met and married George Wauneka.

Henry Chee Dodge served from 1923 to 1928 as Chairman of the Navajo Tribal Council and, then again, from 1944 to 1947. He died in office on January 7, 1947. He influenced Annie through both his political career and his wisdom. On his death bed, Chee Dodge told Annie: “Do not let my straight rope fall to the ground.  If you discover it dropping, quickly one of you it up and hold it aloft and straight". By visiting Council meetings with her father, she had understood many of the issues her father was involved in and became actively involved in those causes. 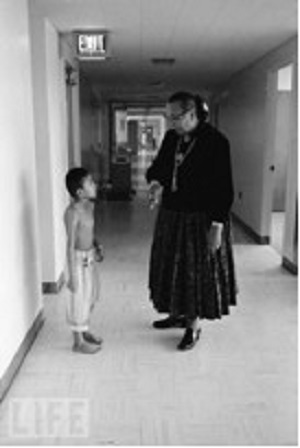 Annie Wauneka worked as a Chapter secretary and, within two years of her father’s death, she had learned enough of the political system to win a seat on the Tribal Council for District Seventeen (Klagetoh and Wide Ruins precincts), beating out two men. She was, then, appointed as Chairman of the Tribal Council’s Health and Welfare Committee. In 1956 when the Surgeon General of the United States organized the Advisory Committee on Indian Health, he invited Mrs. Wauneka to become a member. As a child, Annie had seen the devastation that tuberculosis had created in the Navajo community. She was determined to discover why her people were so vulnerable to this disease. She found that many Navajo who had recovered from tuberculosis, upon returning home to the reservation, would contract the disease once again due to poor nutrition and unsanitary living conditions. After seeing the unsanitary living conditions throughout the Navajo tribe, Mrs. Wauneka successfully requested funding from the Navajo Council to repair homes that needed upgrading. The basic lifestyle of a Navajo on the reservation at the time did not include running water or electricity and hogans had dirt floors; basic necessities for a healthy lifestyle were hard to maintain in this environment. At a Chinle, Arizona public school, Annie said, “Nothing is wrong with the Navajos except the lack of education. In fact, we are a half-century behind the rest of the country. We should like to keep our children near us, not miles away at school where we cannot supervise them. But this is the way it has to be at present. Education will be the answer to our problems. But it will take time.” 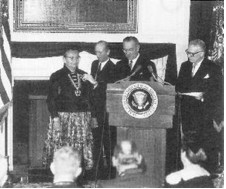 Mrs. Wauneka continued her work in many areas concerning Navajo health and received many awards for her efforts, including the Presidential Medal of Freedom Award. In the fall of 1963, President John F. Kennedy sent her the news of this award by telegram, and presentation of the Medal of Freedom was made by President Lyndon B. Johnson on December 6, soon after President Kennedy’s assassination. She was the first Native American of the southwest to be so honored.

Wauneka continued to provide advice to the Navajo Tribal Council and much-needed information to her people until her death on November 10, 1997 at the age of eighty-seven. Calling her "one of the great Navajo leaders," Navajo President Albert A. Hale summed up the enormous influence she and her work had had on the tribe in her obituary in the Navajo Hopi Observer:

"Her efforts in education, health and the quest for justice and equality with our neighbors profoundly improved the lives of every one of us."