“I deal with the common woman who smells of the fields and maize. She lives and breathes… My women work and walk on the land. They need to be strong to survive. They have big hands, strong feet. They are soft and strong like my grandmother who gave me life.” — RC Gorman

Gorman was born in Chinle, Arizona, the son of Carl Gorman, a noted Navajo painter and teacher and one of the Navajo Code Talkers of World War II. He was raised by his parents and grandmother in a traditional Navajo community where there was little contact with the outside world. As a young boy he tended the family’s sheep in Canyon de Chelly, drawing on the rocks and making sculptures out of the mud. Canyon de Chelly is a place that is steeped in legend and magic and served as an area of refuge for the Navajo for centuries. 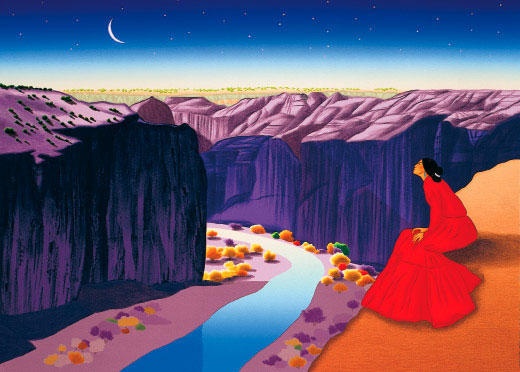 This upbringing, both in the enchanted surroundings of Canyon de Chelly and the stories of his family’s and Navajo history, kindled a passion in Gorman to convey the essence of being Navajo in his art. The family encouraged the young boy to draw, especially when seeing his talent at a very early age.

After high school, Gorman served in the Navy, and then attended universities in Arizona and Mexico City, where he studied literature and art. In 1968 Gorman opened the first Native owned art gallery in Taos, NM, a small town in the western United States known for its art galleries and for a legacy of drawing thousands of artists to it for over a century. Over the next few years RC’s popularity grew and he became famous worldwide for his paintings with vibrant colors, graceful lines, and of beatific Native women.

“My women are remote, withdrawn in their silence. They don’t look out, but glance inward in the Indian way. You know their faces, but not a thing about their thoughts. They do not reveal whether they are looking at us or not.” — RC Gorman

In his own words, Gorman said:

“Navajos always had respect for strong, powerful women who would go out and chop wood, herd sheep, have babies in the field. My Indian woman isn’t glamorous but she is beautiful.”

“I like to think that my women represent a universal woman. They don’t have to be from the reservation. They could be from Scottsdale or Africa. They’re composites of many women I’ve known.”