Communications among the Allied Forces, from ship to ship and battalion to battalion was of vital importance to coordinate battle plans and tactical information. To protect these communications, secret codes were created by the Allied armies so that the enemy would not be aware of America’s troop movements. These ciphers were eventually broken by the Japanese and vital military secrets lost to the other side. 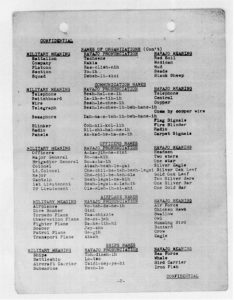 Military recruiters visited the Navajo reservation and first selected thirty young Navajo men to assist in the program’s creation. Because many of these men had never lived off the reservation, military life was particularly difficult. These Navajo Code Talkers realized the importance of the program to winning WWII and they worked tirelessly to perfect the code. The first battle they were involved in was Guadalcanal, where they both fought as soldiers and transmitted secret tactical matters between American troops. The code was never written down on the battlefield, so the Code Talkers had to be fully trained in the code to be able to instantaneously relay information with perfect accuracy, or men’s lives would be in jeopardy.

Code Talkers were part of all U.S. military campaigns in the Pacific from 1942 to 1945. Thousands of American soldiers’ lives were saved due to the unbreakable Navajo code. It is believed that one of the most important Pacific military campaigns, the battle of Iwo Jima, would not have been won by the U.S. without the Navajo Code Talkers’ accurately and safely relaying important military secrets.

ght use the Navajo code system in the future. Because of this, the Code Talkers were sworn to secrecy, until 1968 when the code was declassified. Finally, in 2001, the Code Talkers received the recognition that they deserved from a grateful U.S. government: the Congressional Medal of Honor.

The Navajo Code Talkers played an important role in the Allied success in the Pacific during WWII. They created a code the enemy was unable to decipher and, in doing so, helped the United States win World War II.

Lena Carr, Emmy Winner and Navajo filmmaker created War Code: Navajo, along with producer Amy Wray.  This film won the 1995 News and Documentary Emmy and was considered Outstanding Historical Programming.  Please click below to see a short clip of this moving documentary about the Navajo Code Talkers.