According to a traditional Navajo story, the holy being Spider Woman instructed the Navajo women how to build the first loom and taught the Navajo how to weave.

Navajo textiles were originally created for their functionality – in use as cloaks, saddle blankets, dresses, sashes, etc. In the late 1800’s trading post owners encouraged the Navajo weavers (mostly women) to make quantities of blankets, more than those that were made for family use. In the 1880’s, as the railroads built lines out to the southwest U.S. and the Santa Fe Trail was opening, tourists were able to visit areas of the country that weren’t possible for them before. These tourists were eager for souvenirs, especially for the high quality Navajo textiles.

Historically, the Navajo may have learned to weave from their Pueblo Indian neighbors. Through friendly trading and hostile raiding, the two peoples came in close contact with each other. In 1680, in the aftermath of the ‘Pueblo Revolt’ against the Spanish, many Pueblo people sought refuge with the Navajo to escape the conquistadors. The years of social interchange between the two native groups allowed for an exchange of ideas and weaving expertise. The Pueblo people were weavers since the 800’s. First, they used cotton from Mexico, and later, wool from Iberian Churra sheep that the Spanish had brought with them to the New World. Spanish records show that Navajo people began herding sheep and weaving wool blankets from the 1700’s.

Almost immediately, the Navajo surpassed all others in their weaving skills and were considered the best weavers in the southwest.

The Navajo developed the Spanish sheep into a unique breed, which today is called the Navajo Churro. These sheep produced strong, long wool that was well suited to weaving; plus, the Navajo Churro were a hardy sheep, able to withstand both the heat and cold of the desert. Hand-spun wool from these animals was the main source of yarn for Navajo blankets until the 1860s, when the United States government uprooted the Navajo people from their homeland, forced them to relocate to Bosque Redondo, and seized their land and livestock. When the Navajo were allowed to return to their traditional lands in 1869 Navajo, they were given funds to purchase more livestock.

Prior to the mid-19th century, Navajo weaving coloration was mostly natural brown, white, and indigo. After the 1850’s, by mixing the indigo with indigenous dyes from various parts of the reservation, using pinon pitch and ash to create black, and through the purchase of cochineal (extract of a South American/ Mexican beetle) to make red, the Navajo weavers had numerous colors to work with. In the early 1880s, aniline dyes became available in bright shades of red, orange, green, purple, and yellow. The influx of all these new colors was the artists’ impetus for creative experimentation with the new color palette. An entire generation of Navajo weavers began new styles of rugs, using these vibrant colors.

Several European-American merchants influenced Navajo weaving during the 19th century. The merchants encouraged professional production and marketing among the traders and the weavers. They attempted to regulate the quality and cleaning of the wool used, processing of dyes and introduced new Oriental and Caucasus patterns which were popular in the 1800’s. Each Navajo community was encouraged to develop and keep to their own distinct pattern style, such as:

Many Navajo women today are weavers and are still creating Navajo rugs which are heavily in demand around the world. 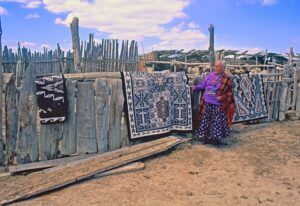