The Holy People placed the Navajo People on the land in between the four sacred mountains: 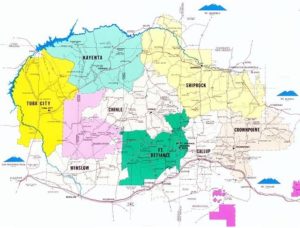 1. Huerfano Mesa  (Dzil Na'oodilii - Holy People Encircling Mountain)
Sacred Mountain of the Center
near Bloomfield, New Mexico.
This is where Changing Woman gave birth to her twins, and lived in the first hogan.